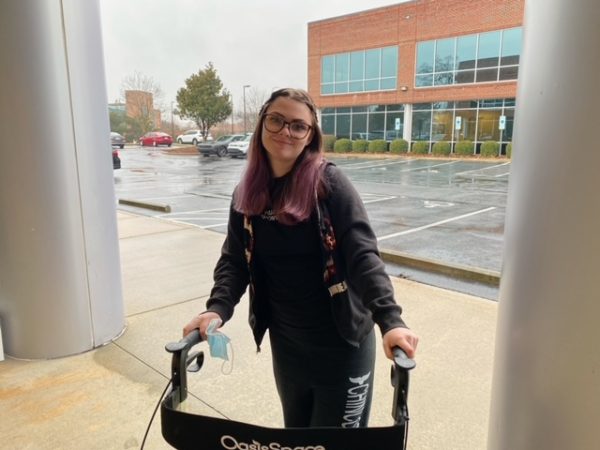 After years of trying to obtain a diagnosis for my 22-year-old daughter Kacey, she was recently diagnosed with a rare disease, Hereditary Spastic Paraplegia (HSP). Although the name of her condition would suggest that she has family members with this condition, Kacey has no family members known to have HSP.

I would like to give you a little bit of a background on her story. When she was approximately 17-years of age, my husband and I began to notice that she was walking with a very slight limp which progressed quickly to where she would hyperextend at the knees with walking. I took her to see an orthopedic physician, thinking she had an issue with her knees, however, her knees on x-ray were unremarkable but the neurological exam unfortunately was not. She was found to have ankle clonus and a positive Babinski sign, suggestive of a neurological process. The orthopedic physician then referred her to see a neurologist in our area.

After undergoing a brain MRI, it was felt that she may have multiple sclerosis but the spinal fluid collected from a lumbar puncture failed to confirm a diagnosis and after reviewing her brain MRI more closely, they ruled out MS. Other conditions were then considered.

Over the course of the next few years, Kacey saw seven different neurologists, from Duke University to Wake Forest Medical Center, The Mayo Clinic, and most recently the University of Michigan. She underwent a series of medical diagnostic testing, a multitude of lab work, genetic testing, and more MRIs, all of which failed to reveal a diagnosis. Unfortunately, during this time, Kacey’s condition significantly progressed. She was falling often. She developed foot drop. She could no longer do things she could do previously.

There were a couple differential diagnoses that were felt to be possibilities. One was leukodystrophy which is ultimately a fatal disease and the other was HSP. After researching HSP, I found a physician, Dr. Fink, who specializes in the condition at the University of Michigan. We did make the trip there so he could evaluate her. After a thorough, three hour evaluation, he felt Kacey does, in fact, have HSP. There are several known genes that cause this condition and there are several more that are still unknown. It is felt that she has a complicated form of the disease due to the disease appearance and her progression. Unfortunately, there is not “cure” for HSP. There is only medication to help with symptoms and of utmost importance is physical therapy to combat the progression and the spasticity.

Kacey, in 3+ short years, went from being able to dance, do cartwheels, and run on a treadmill to now requiring the use of a walker or wheelchair. Her foot drop has progressed rapidly to where without wearing AFOs, her feet completely drag across the floor when trying to ambulate. She also now requires a shower chair. Her movement is extremely slow due to the spasticity.

Although Kacey has undergone some physical therapy, she has had minimal progress as most facilities are not familiar with her rare condition or her specific needs. I have, however, found a location that specializes in paraplegia and spinal cord injuries but they are costly and their services are not covered by insurance. They did explain that there are some grants available to help cover the cost. They did provide me with some organizations but I am seeing that most of them are for people with spinal cord injuries from an accident which does apply in Kacey’s case.

If your organization would consider a grant for her, we would be so very grateful. I have been unable to find anything thus far that is specific to her condition.