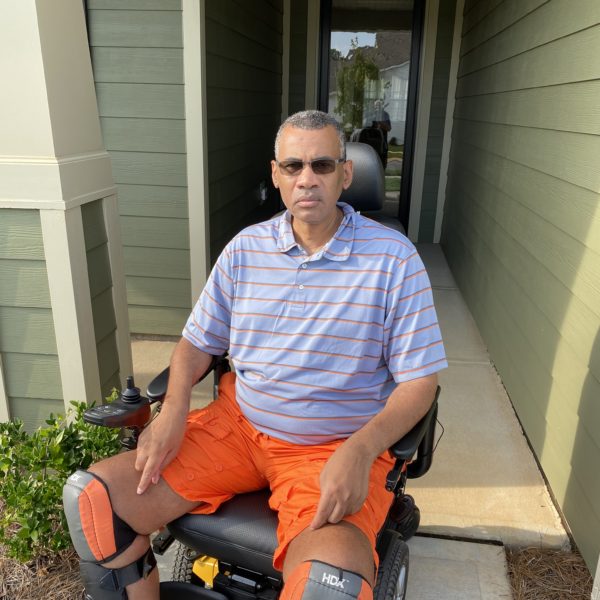 In December 2009, my family was in town from North Carolina and New York visiting for the Christmas holiday. A lot of love, laughter, and joy-filled the house. As we all began to retire for the evening immediately following Christmas dinner, I proceeded to head upstairs for the night! As I approached the main staircase, I noticed I could not climb the stairs without pulling up on the rails. Although I could come down the stairs with no problem, I could no longer climb them with ease. For the next three days, until my family departed, it was difficult for me to climb the stairs and to rise from a seated position in a chair. I reached out to my primary care doctor and requested an appointment. He saw me within two days and referred me to a rheumatologist.

When I met with the rheumatologist, he completed a thorough review and stated he did not know what was going on with me, but he would do everything possible to find out. Throughout this journey since 2010, this was one of the few times that one of my doctors had in fact been truthful with me. Based on his preliminary findings he began to rule-out several diagnoses. He then referred me to a neurologist at Johns Hopkins University for a thorough physical examination and extensive medical history review. From this visit, several extensive tests were ordered such as blood tests to look for disease-specific enzymes or antibodies, nerve conduction studies, to measure any interruptions in the nerve signal, electromyography (EMG) to help rule out neurological conditions, a muscle biopsy to verify the presence of inclusion to confirm the diagnosis and genetic testing. Inclusion body myositis (IBM) is a progressive and degenerative muscle disorder characterized by muscle inflammation, weakness, and atrophy (wasting).

I was at the height of my career as a newly appointed middle school principal. Running a school program and worrying about my health was constantly on my mind. I did not share any of my health concerns with my colleagues or friends. Only my family knew what I was going through. For the next 5 to 7 months, I continued to be counseled by my physicians in terms of what they thought the diagnosis might be. Once again, a lot was being ruled out by the doctors.

In August of 2010, I was attending a system-wide administrator’s meeting. When I left my home that morning felt rundown. By the time I arrived, several of my colleagues noted that I appeared pale, “white as a sheet.” I was even struggling to rise out of the chair. About an hour or so into the meeting, I began to sweat profusely and could hardly catch my breath. I notified my director that I was not feeling well and that I was going to drive myself home or to the hospital close to my home. To this day, I am unsure how I made it from Gaithersburg, Maryland around the outer loop of the beltway of Washington, DC to Doctor’s Hospital in Lanham, Maryland. On an average day, the trip would take about 45 minutes. When I arrived, the ER staff immediately took me back and began working on me. The attending physician alerted my family that my chances were grim. I remained in the hospital for 3 to 4 weeks. The doctors determined I had developed pneumonia, as a result, of steroid use from IBM. At the end of the first week, my breathing improved. From the remaining time in the hospital, my lower extremities became affected. There was a noticeable foot drop on my leg side. Little to no physical therapy was recommended at the time. At my discharge. I remained on medical leave from my principal job through November.

When I returned to work, I was using a cane and an AFO on my left foot. Over the next 7 years until my retirement in 2017, I gradually progressed from using a cane, to a rollator, and to a motorized scooter to move about the school. Throughout my ordeal I would cry, experience muscle weakness and waste away from my quadriceps, my knees would give way and buckle wherein I would trip and fall, and it was becoming difficult for me to freely move about and/or grasp items with my hand. My school environment was very accepting of my limited mobility issues and established a yearly fundraiser at the school in my honor for IBM similar to Amyotrophic Lateral Sclerosis (ALS) known as the “ice bucket challenge.” On the other hand, the central office was not so supportive and understanding at times. Although it was difficult, I went the extra mile to ensure I was always at the top of my game and performed my duties as a school-based administrator. Once an official diagnosis was provided, I continued to follow the treatment plan of each physician, participate in the recommended therapy sessions, and adhere to prescribed medications, and suggested assistive mobility devices. In addition, I did everything possible to learn more about my disorder and how to sustain my quality of life. I must admit there were moments when I simply just wanted to give up but with my strong faith in God, the support of my family, friends, and co-workers, and encouragement from my doctors, I continued to fight and take charge of this disorder.

While I am aware my symptoms are not always present or equally felt on both sides of my body, a lot of the treatment I have had over the years has somewhat slowed the progression. The ongoing rehabilitation and forms of physical therapy and retraining have been extremely beneficial and encouraging.

At this stage, I welcome a more structured and customized exercise plan and/or program wherein I can replicate at home and focuses more on weight bearing and upper arm strengthening and conditioning without tiring me out and causing further muscle damage. In addition, one that is safe and fully functional for me under the care and supervision of a trained specialist as well as for home use. I would invite any trained professional who is familiar with my disorder to continue to support me in managing any, and all aspects and risks of living with inclusion body myositis. I might suggest a myositis specialist who can help me manage these and other aspects of a fully functional regiment as well as the risks of living with inclusion body myositis.

At some point, I would like to participate in a clinical trial for myositis if it would be beneficial for me or someone else.

I have vowed not to allow this disease to get the best of me, as long as, I am in my right mind. I am a survivor and a fighter.